Viktor Hovland: "It is a place like none other"

Hovland, the fourth-ranked player on the Official World Golf Ranking, will this week make his third appearance at a venue which holds fond memories after he was the low amateur on debut in 2019.

Now, having tied for 21st last year after missing out on the rescheduled 2020 edition, the 24-year-old Norwegian intends to draw on the progress he has made in his game during the intervening time.

“It’s a place like none other,” Hovland said at his pre-tournament press conference.

“The course is hard. It’s kind of made to make you feel uncomfortable.

“I think playing the Ryder Cup was very helpful for me to just kind of handle new experiences better. So even if I am uncomfortable, it’s not the end of the world. I know how to handle that.”

Hovland made history as the first Norwegian to win on the DP World Tour with victory at the BMW International Open last June and claimed his first Rolex Series title at the 2022 Slync.io Dubai Desert Classic in January.

So, is his impressive career to date owed to natural golf ability or mental resilience?

“It's hard to answer,” he said. “I feel like they kind of go hand in hand. If you're playing well, it's easy to be mentally strong.

“But if you don't have a certain skill set, you can't wish yourself to suddenly be good at it.”

Hovland demonstrated he can overcome unforeseen challenges during last year’s first round at Augusta when he made a triple bogey on his opening hole, before making three birdies in a five-hole stretch as he made a respectable 73.

“I knew that I’d done a bunch of preparations before the week and my game felt pretty good,” said Hovland.

“So, instead of freaking out and kind of not giving up, I just tried to reset and trust my game.”

Hovland, already a three-time winner on the PGA TOUR, believes his debut at Augusta as a rookie taught him a valuable lesson in keeping expectations in check.

Asked to reflect on what advice he would give a first-time player at Augusta, Hovland replied: “I think I was maybe too caught up in trying to be too perfect. It's a Major.

“You're playing against the best players in the world, so it's easy to think that every part of your game has to be perfect.”

Hovland saw his preparations for the first men’s Major of the year curtailed on Tuesday as he was only able to play the first five holes on the front nine before inclement weather forced the course to close.

Fortunately, though, that is the stretch of holes he is trying to gain more confidence in.

“I think you have a tendency of going too much at the pins there instead of maybe playing more of a safer shot,” he said. “Those holes are the toughest on the course.”

Hovland, who has five top ten finishes in eights starts this year, has plenty of reason to be optimistic ahead of his first round where he will be joined by Xander Schauffele and 2015 winner Jordan Spieth.

But who does he credit for his upbeat demeanour?

“I guess it's a lot of genes,” he said. “My mum and dad are pretty happy people. Norway is a pretty happy country. It's a lot about that.

“Obviously, I have a pretty good job for a living, so I don't have a whole lot of things to complain about.” 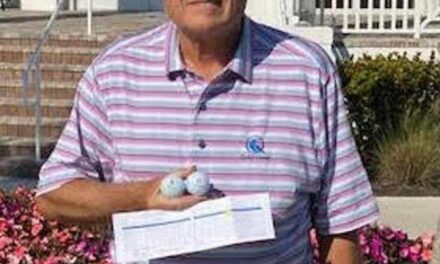 Kevin Lamb, two holes in one in same round