Tsitsipas: 'I Would Only Do It For My Brother'

Stefanos Tsitsipas says that he has made a pact with his brother, Petros Tsitsipas, to play more doubles together in 2021.

“I wanted to start the new year in the most fresh and dynamic way,” said Tsitsipas, who partnered his brother at the ATP Cup and the Australian Open last month. “I want to play as much doubles as possible with my brother, Petros. It’s been a dream of mine, but I haven’t made it happen a lot.

“I want to take the opportunity to play with him in 250 and 500 events, a Grand Slam, as we did. It was my best memory of my stay in Australia. I am primarily focusing on my singles career, but I also want to help my brother and his performances. I would only do it for my brother, and no one else. I want to build a team with him, exclusively with him. I’m not planning on playing with anyone else.”

Tsitsipas, the second seed at the ATP 500 event in Rotterdam, opens his singles campaign against Egor Gerasimov on Tuesday. The Tsitsipas brothers will face last week’s Singapore Tennis Open titlists Joran Vliegen and Sander Gille in the doubles. The 22-year-old added that he still needs to work on a few things before he is able to take the next step for a place in a Grand Slam final.

“I didn’t really have a goal at the Australian Open,” said Tsitsipas. “I wanted to win the tournament like the other 127 players, but I was taking it step-by-step and going on a journey. Every match I won, I felt better than the next day. It was great playing a semi-final, but I need to unlock a few things and take the next step to reach a Grand Slam final.”

The Greek star recovered from two-sets-to-love down against Rafael Nadal in the quarter-finals at Melbourne Park, but fell to Daniil Medvedev — the top seed at this week’s ABN AMRO World Tennis Tournament — in the last four.

“I felt two different emotions,” said Tsitsipas, when asked to compare this year’s semi-final loss to the loss in the 2019 Australian Open semi-finals (l. to Nadal). “Having the semi-final run the first time felt quite special. It wasn’t something that I’d achieved before.

“I did make the second week of a Grand Slam the year before at Wimbledon, but I still felt a long way away from being consistent and making [it to] the semi-finals. I had experience this time, and I knew what steps I had to take to be able to reach that goal again.” 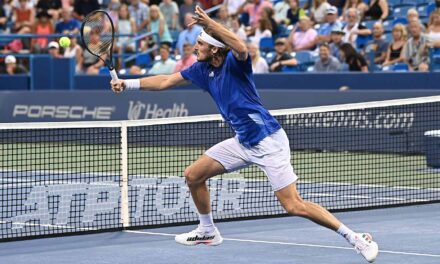