Skip Bayless: I’ve never seen anything like Kevin Durant, he’s the unicorn of the NBA | UNDISPUTED 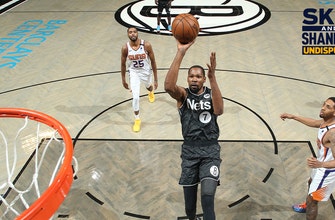 Kevin Durant made his return from a bruised thigh with an impressive performance off the bench. KD put up 33 points in 28 minutes on 12-of-21 shooting in a 128-to-119 win over the Phoenix Suns. The performance prompted Skip to tweet quote, ‘Kevin Durant proves ONCE AGAIN he’s Best Player on the Planet. The man has played only 24 games this year, returned today AND SCORED 33 IN JUST 28 MINUTES as the Brooklyn Nets without James Harden easily beat the no-joke Suns. Come on, Blind Witnesses, give it up. KD better than LeBron James.’ Hear what Skip Bayless and Shannon Sharpe have to say about Kevin Durant’s impressive performance against the Suns.

Leander Paes: Would be fun to play with Roger Federer on the same side of the net