Reilly Opelka was not always at his best Wednesday, but it was enough to earn a win in Houston.

The third seed defeated qualifier Mitchell Krueger 3-6, 6-2, 6-4 to reach the quarter-finals of the Fayez Sarofim & Co. U.S. Men’s Clay Court Championship after one hour and 53 minutes.

“He played well, I think he came out swinging. I think he was free, I wasn’t. It’s a different situation,” Opelka said. “He’s playing free on that court and I hadn’t played a match on clay yet. He was three matches in, so it changes the momentum. It was a good opportunity for him to play free and get a win and I’m a guy that hasn’t always been the most consistent, especially changing surfaces, so I think it was a good win.”

Opelka entered the match having lost just 13 service games in 19 matches this season, but he was broken twice in the first set against Krueger. The World No. 18 has been dealing with a right shoulder injury that forced him to retire from his opening match at the Miami Open presented by Itau against Francisco Cerundolo, and he said it still bothers him on his devastating kick serve.

So after losing the first set, he decided to not worry about any potential pain in hitting that shot, and went after it, which helped him turn the match around. Opelka hit 15 aces in the match, including a booming one out wide in the Ad court on match point.

The three-time ATP Tour titlist will next play Dutch qualifier Gijs Brouwer, who ousted American J.J. Wolf 6-1, 6-1. Brouwer had never competed in a tour-level match before this week.

Another bigger server, Nick Kyrgios, showed great form on the clay earlier in the day.

Before arriving in Houston, the Australian had not competed on the surface since 2019. However, the wild card has played well on the red dirt, and on Wednesday he defeated American Tommy Paul 6-4, 6-2 to reach the last eight.

“He’s a very good player. He’s young and he’s already shown what he can do and who he can beat,” Kyrgios said in his on-court interview. “I had to be locked in today and I knew that I had to serve well. It’s probably one of the better matches I’ve played on clay in my career, so I’m pretty happy with the way I came out here today, just put my head down and went to work.”

Paul is a proven clay-court competitor, having won the 2015 Roland Garros boys’ singles title. But Kyrgios was in control throughout the 70-minute match, in which he saved all six break points he faced. The 26-year-old hit 10 aces and won 88 per cent of his first-serve points to earn a quarter-final clash against lucky loser Michael Mmoh.

“I’ve been serving really well, so I just wanted to keep to good habits,” Kyrgios said.

The American, who moved into the draw when Casper Ruud withdrew due to tooth pain, defeated countryman Sam Querrey 6-2, 6-4 in 75 minutes. Mmoh will try to reach his first ATP Tour semi-final.

Top Seeds Ebden/Purcell Advance In Doubles
Australian Matthew Ebden and Max Purcell, who made this year’s Australian Open final, cruised past home favourites Steve Johnson and Querrey 6-2, 6-2 to earn a spot in the quarter-finals. The second seeds, however, did not have the same success.

Following his singles victory, Kyrgios returned to the court in Houston to partner Jack Sock past Andre Goransson and Nathaniel Lammons 7-5, 3-6, 10-5. 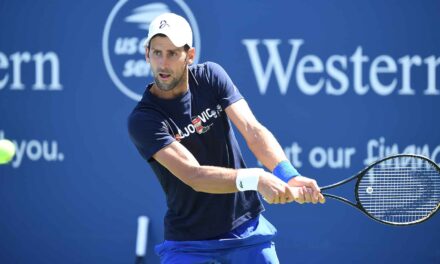 After a Long Grind, Mackenzie McDonald is Back in the Top-100 and Aiming Higher