Rafael Nadal’s stellar start to the 2022 season may have been disrupted by a rib injury, but the Spaniard’s six-week layoff has done nothing to dampen his competitive spirit.

“I am happy doing what I am doing. I still feel [I am] competitive when I am healthy enough.”

Nadal returned to the ATP Tour for the first time since March at the Mutua Madrid Open last week, reaching the quarter-finals before falling to eventual champion Carlos Alcaraz. He acknowledged being unable to compete after picking up his rib injury en route to the final in Indian Wells had been tough, especially after winning his first 20 matches of the year to register his best start to a season. Yet the desire to compete still burns brightly in the legendary Spaniard.

“For the moment I am happy. It is true that I went through, again, a tough period of time. But I am here to enjoy and to give myself a chance to play well here in Rome.”

Nadal faces John Isner or Francisco Cerundolo in his opening match at the Foro Italico, where he is the defending champion after outlasting Novak Djokovic in the championship match to clinch a record-extending 10th title at the event in 2021. He believes his week in Madrid, which included victories over Miomir Kecmanovic and David Goffin before a thrilling three-set defeat to Alcaraz, gives him a better chance to make it 11 titles in the Italian capital.

“I need to keep improving…[But] it’s normal that I need some more time in terms of everything,” said Nadal. “In terms of movement, in terms of being more fitter, in terms of reading again the game. In general terms, [it was] not a negative week in Madrid, even if the tournament is probably the most difficult for me, [with] the altitude.

“[I am] excited to be in Rome. It’s a place that I love so much. [I have] amazing memories. I’ll try my best, as I do always. I hope to be ready to play a little bit better than last week. Let’s see.”

The 36-time Masters 1000 champion has enjoyed watching the rapid rise of his countryman Alcaraz, despite the disappointment of losing out in the pair’s quarter-final clash in the Spanish capital. For Nadal, the level the 19-year-old showed to charge to a second Masters 1000 title of the year was not unexpected.

“He [Alcaraz] already won in Miami, won in Barcelona. Honestly it is not a big surprise,” said Nadal. “[I am] happy for him. Everybody knows the amount of confidence he has right now, the level that he can reach. [I am] happy for him and happy because we have an amazing player in our country for a lot of years to come.

“It’s always special to win at home. It has probably been a very special week for him…At the same time I am happy to have somebody like him from my country achieving all the things that he’s achieving.” 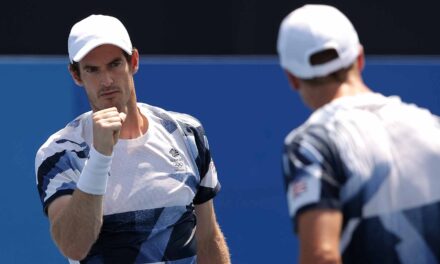 WATCH. Tsitsipas training in Miami with Rublev and his new coach Thomas Enqvist