Mayar Sherif couldn't hide his happiness after winning her second WTA 125 title in Marbella as she is happy to see her hard work paying off.

It was the first meeting between Sharif and Korpatsch.

"I've been working hard since the beginning of the season," Sherif said after the final, per the WTA Tour website. "It didn't show result-wise, but I knew I was improving, and it came out today and the whole week.

"I haven't been feeling very confident on the court the past few months, even though I was feeling very well training and feeling that I was improving. The results were not coming. I just feel very proud of myself that I didn't get so down with the bad results at the start of the season. If you keep putting the hard work in, the results will come."

Sherif feels she has become a better player

"Honestly, I've been doing well the last few months improvement-wise," Sherif added. "I feel like I'm doing a good job and improving on hard courts. The results will come."

After blowing two break points, Sherif got broken in the fourth game.

However, Korpatsch's lead was short-lived as Sherif broke back in the following game and the first set went into a tie-break since no more breaks were seen in the opener.

Sherif absolutely dominated the tie-break as she took a 6-0 lead, before realizing her first set point.

Sherif led 5-3 after the opening eight games of the second set but then failed to serve out for the match in the ninth game.

However, Sherif kept her focus as she broke Korpatsch in the 10th game when the German was serving to stay in the final. 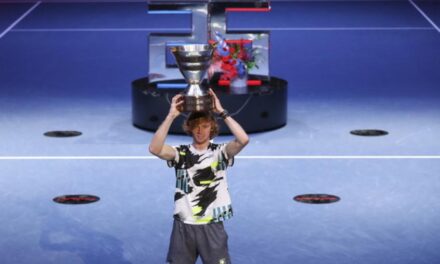 Rehabbing Roger Federer Plots His Return to Tennis in 2022