Bryson DeChambeau is playing the Masters against his doctors’ recommendations, he said Monday in his pre-tournament press conference at Augusta National.

He has been suffering this year through a torn labrum in his left hip and broken bone in his left hand, both of which were exacerbated by a recent fall while playing ping-pong. He declared himself at 80% health and said his ball speed is still around 190 mph, which would lead the TOUR.

The Masters will be DeChambeau’s fourth start in the U.S. in 2022. He’s missed the cut in two of them, finished T25 out of 38 players at the Sentry Tournament of Champions and went 1-2-0 two weeks ago at the World Golf Championships-Dell Technologies Match Play, which marked his return to competition after a six-week layoff because of the injuries. He shot 73-76 at last week’s Valero Texas Open to miss the cut by six shots.

“The past few weeks have been very, very difficult on me, not playing well and not hitting it anywhere near where I know I should be hitting it in regards to straight. Yelling "fore" off the tee every time is just not fun,” DeChambeau said Monday. “It's very difficult on your mental psyche as well. It's one of those things that everybody has a tough stretch in their career, and especially with coming off an injury, swinging one-handed for, you know, three or four weeks with your right hand only, it messed my normal golf swing up.

“It's a learning experience. … Your worst failures are your best teachers.”

The torn labrum in his left hip dates back to when DeChambeau began his speed training a little more than two years ago, after he slipped on concrete. He remembers feeling a ‘pop’ in his left hand last fall, shortly before his match against Brooks Koepka. Then he fell on a marble floor in February while playing table tennis against Joaquin Niemann and Sergio Garcia, landing on both his left hip and hand.

“That really just took me out,” he said Monday. “That's really when it just got to the point where I couldn't even grip the golf club. I tried to play that week, and it was impossible. I was not even gripping with my left hand that week. I was like, this is dumb, I have to go take care of my body first and get it right.”

DeChambeau took six weeks off, missing his title defense at the Arnold Palmer Invitational presented by Mastercard and THE PLAYERS, before returning at the World Golf Championships-Dell Technologies Match Play. DeChambeau said his doctors recommended that he sit out four months but he couldn’t miss an opportunity to play the Masters, however.

“This only comes around once a year, and I've got to give this a go,” he said.

WTA Rankings Report: Azarenka to Top 15, Osaka back to No.3

LPGA, the biggest names at the Asia’s Major 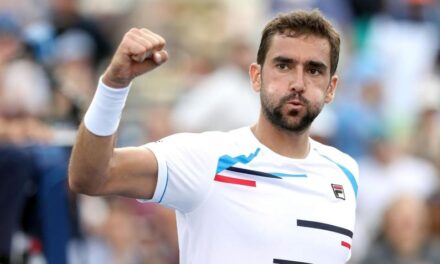