It’s not often players get to enjoy food tastings at tennis tournaments, but that’s what Matteo Berrettini and his younger brother, Jacopo Berrettini, did Monday evening.

The doubles wild cards, who won their first-round match on Tuesday, had a special meal prepared by the chef of “Circolo dei buoni e cattivi”, the Tennis Club Cagliari’s restaurant.

The Roman brothers began with local cheese and sausage served with typical Sardinian ‘Carasau’ bread, before enjoying homemade pasta with tomato sauce and pecorino cheese. For the main course, they had lamb with artichokes. The Berrettini brothers passed on a dessert of pancakes with orange flavour.

The Italians feasted under the watchful eye of their mother, Claudia, who assured those there that her sons know how to prepare a decent meal, adding that Jacopo has been interested in cooking since an early age.

ATPTour.com spoke to Matteo about the food he enjoys, how he alters his diet during tournaments and more. 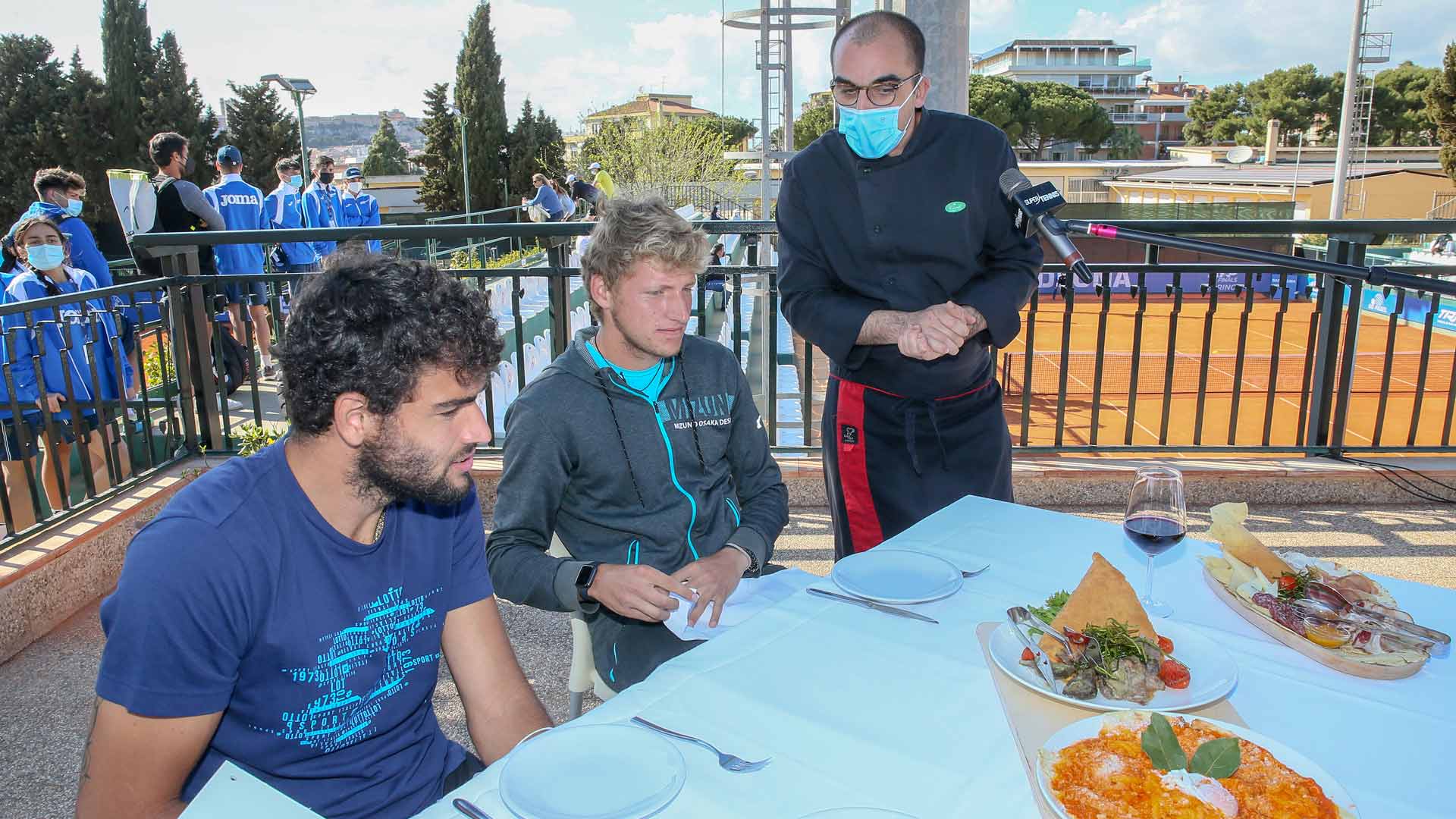 Photo Credit: Giampiero Sposito
How much did you enjoy the Sardinian food and what did did you like the best?
Yeah, [I liked it] a lot. It was a really nice experience, especially during these lockdown times. We cannot go to restaurants and stuff, so it was nice to have really nice food. I love Sardinia, I have been coming here since I was a kid. It was nice and reminds me of good times with my brother when we were young.

How much do you change your diet during a tournament and before matches?
I try to eat more clean, more white rice, chicken, not heavy stuff, even though I can eat a lot. But sometimes you have to balance also the mental part, because it’s important to feel happy about what you’re having and what you like to eat. But for sure before the matches, you have to be careful and eat pretty clean.

What are some foods you love that you know you cannot always eat because of tennis and how tough is it to adjust to not enjoying them as much if at all?
I love burgers. Normally when I lose, I have burgers, because it’s the first time I can have it during the week. But I’m a great lover of obviously pasta and pizza and they’re not that bad for the diet when you have to play, especially to recover.

It’s some carbs and it’s important to have fat, carbs and protein, so you have to mix it up a little bit. It’s not that tough. I can handle it and luckily I’m a big guy, so I can take a lot of food.

Besides Italy, what’s the best city on Tour for food and what is your favourite dish there?
I would say I really like Spain. It’s similar to the Italian kitchen, but it’s a little bit different. I like its Mediterranean. I like the Jamon Serrano, I like how they do stuff with fish, so I like Spain and maybe it’s that the weather is similar to Italy, but I really like the food there.

Did You Know?
The club restaurant, which is also serving as the player restaurant this week, partakes in a project that gives back to the community by providing job opportunities to people with light handicaps or a challenging past.