The Russan can surpass Nadal by reaching the final in Rotterdam.

It has been a long time since a player outside of the Big 4 – Roger Federer, Rafael Nadal, Novak Djokovic, Andy Murray – held the ATP’s No.2 ranking. Never mind the top spot, that’s a bit out of reach at the moment, but Daniil Medvedev is closing in on No.2 and the Russian, who is currently 115 points behind Rafael Nadal as he enters play this week at Rotterdam, can get there by reaching the final at the ABN Amro.

If he does that Medvedev will surpass Rafael Nadal in the rankings and become the first non Big 4 player to hold the No.2 ranking since Lleyton Hewitt on July 18, 2005.

Is Medvedev stressed out at all about his big opportunity?

"For sure it's a bit of pressure, the normal part of a tennis career and tennis life to have some pressure in different circumstances," Medvedev said, adding: "For sure I would say that the most pressure would be starting from quarters and semis, because first and second round it is still kind of far to look ahead, so getting ready for my first round and not thinking at all about this, for sure when it comes closer it is going to stay in my mind, and I'm just going to try to do it."

Will @DaniilMedwed reach another milestone in the FedEx ATP Rankings by the end of the week? @tecnifibre pic.twitter.com/TP2nPyDr5D

Medvedev will face Dusan Lajovic in his first-round match. If he is victorious he will face either Borna Coric or Botic Van de Zandschulp in the second round. His potential quarterfinal opponent could be either Alex de Minaur, John Millman or Kei Nishikori. 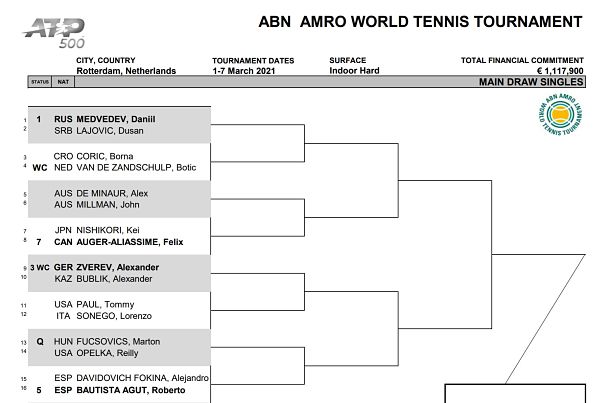 His potential semi-final opponent, if the seeds hold, would be No.3-seeded Alexander Zverev or No.5-seeded Roberto Bautista Agut.

Some tips needed! What do I need to improve on and what’s the best approach to practice? Thank you!

Thriving At 30: Gombos Is Out To Prove That It's Never Too Late

Why Helping Kids Is A Priority For Felix