SAN DIEGO – (September 16, 2021) – Eighteen-year-old Zachary Svajda of San Diego has been awarded a Wild Card into the Qualifying Draw of the $600,000 San Diego Open. The ATP 250-Level tournament is set for Monday, September 27 through Sunday, October 3, 2021 at Barnes Tennis Center.

Svajda became the first player to win back-to-back 18s championships since 2010-11, when Jack Sock, who has been ranked as high as No. 8 in the world, accomplished the feat. (2020 tournament was cancelled due to pandemic)

Since turning professional in 2019, Svajda has spent the majority of his career competing on the International Tennis Federation Pro Circuit and the ATP Challenger Tour. He is one of six 18-year-olds and the lone 18-year-old American in the current Top 500 in the FedEx ATP Rankings. Svajda is currently ranked No. 476.

As the reigning USTA Boys’ 18s National champion, Svajda received a main draw wild card to this year’s US Open where he advanced to the second round.

“It’s great that there is an ATP Tour event in my hometown this year, especially at the Barnes Tennis Center.  I’m excited to get out there and play in front of my family and friends and appreciate the opportunity which the San Diego Open has given to me at this early stage of my professional tennis career,” Svajda said.

“We are so happy to have a talented local player like Zach in our qualifying tournament. He has the game and determination to really move up in the pro rankings,” said San Diego Open Tournament Director Ryan Redondo, “As a two-time Boys’ 18s National champion, Zach has a very bright future and has shown that he is definitely a player to watch.”

The San Diego Open qualifying rounds will take place Saturday, September 25 and Sunday, September 26 at Barnes Tennis Center. A total of four qualifiers will advance to the main draw.

Current Top 20 players entered in the 2021 San Diego Open include: No. 5 Andrey Rublev of Russia, No. 10 Casper Ruud of Norway, No. 11 Felix Auger-Aliassime of Canada, No. 12 Denis Shapovalov of Canada, No. 13 Hubert Hurkacz of Poland, No. 15 Diego Schwartzman of Argentina, No. 17 Cristian Garin of Chile and No. 19 Reilly Opelka of United States.

The ATP 250 tournament features a 28-player singles draw and a 16-team doubles draw. The event offers a total of $600,000 in prize money and tournament champions will receive 250 points in the FedEx ATP Rankings.

Tickets for the San Diego Open can be purchased at www.barnessdopen.com.

French Open third seed Sabalenka out as Pavlyuchenkova powers through 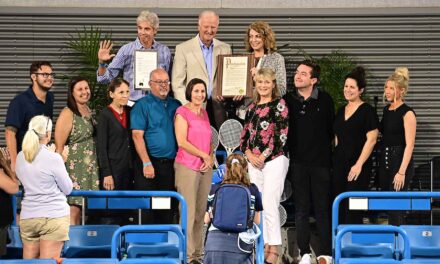